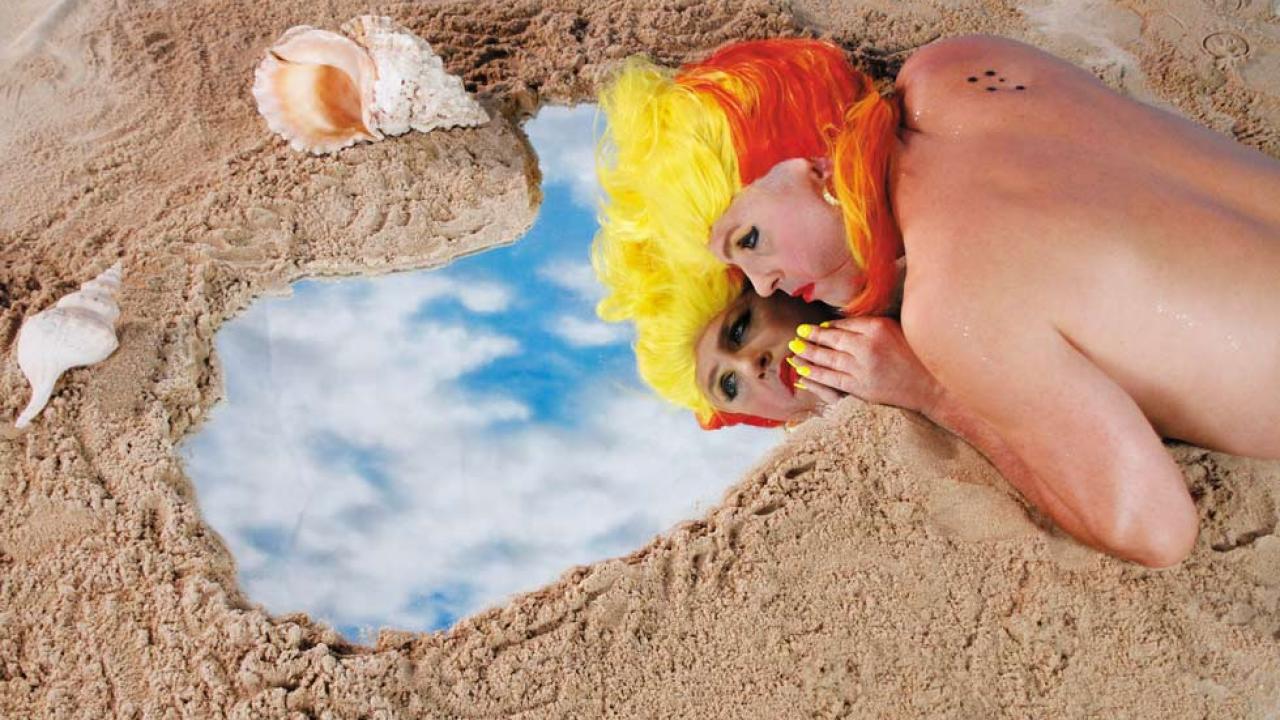 An exhibition of screen-based works that are anchored to visions of the sea, the beach, surfing, channels and waves.

I got hooked on the title Channel Surfing some time ago. It’s a play on the use of the TV screen in the gallery, screen-based works, and is now an exhibition where collectively the artworks can be viewed as channels. In this case, the exhibition comprises artworks by Benjamin Forster, Anita Holtsclaw and Daniel Mudie Cunningham.

A strait of water can be described as a channel, and typically joins two large areas of water or seas together. In a similar way, the title Channel Surfing brings together three works that are anchored to visions of the sea, the beach, surfing and waves. A reflection of its location, with close proximity to the Coral Sea and numerous beach and point breaks, the title pays homage to, and is a play on, a site renowned for surfing and surfers.

This site, Miami on the Gold Coast, home of The Walls, is temporarily the collective home of the LCD (liquid crystal display) and CRT (cathode ray tube) TVs in the exhibition; they’ve all lived domestic lives prior to their stint in the art space, and will return to their homes afterwards. There’s dust on the backs and domestic brand names on the fronts. These are lived appliances whose remote control numbers have worn off. They are showing their age. I like to think that within the TVs is the memory of, and the future potential for, the TV’s primary actions – screening, flicking, scanning and surfing (tele)visions. Although at the time of writing one of the CRT’s has just gone on the blink.

The presentation of most screen-based artworks usually requires remote controls in order to be activated. However, in Channel Surfing, one of the works, Idiot Box by Benjamin Forster, is in itself the controller. A ‘close’ control as I have dubbed it, or micro-controller as Benjamin calls it, is a piece of hand-built custom electronics that generate live patterns on the screen. The notion that waves have a genetic code (something I have recently become interested in) echoes in this work, where the micro-controller’s code generates a video signal, creating a mirrored wave pattern that is unpredictable but not random (like surf waves).

Anita Holtsclaw’s work The Waves combines the artist’s stated “interests in the landscape and the role it plays in recorded media, where our experience of place is altered and framed by the experience of viewing rather than visiting places.” Over a timeframe of 15 minutes, Anita’s waves wash over the screen, almost spilling on the gallery floor, creating a cross-current in the TV’s perpendicular orientation to the real sea lapping at the shore, just 200 metres away.

Set on Cronulla Beach, Daniel Mudie Cunningham’s True Colours remakes Cyndi Lauper’s hit music video of the same name. Here, the artist reimagines the stylised beach setting of the original True Colors video as the Sydney beach Cronulla; as he describes it, “a lurid scene awash with the true blue colours of Australian nationalism.” It’s a remake that Daniel says “amplifies these connotations as a device to ‘queer’ the distorted symbols of Australian nationalism that initiated the homosocial mob violence and territorial tribalism performed at Cronulla on the day of the riots”.

These works are exhibited on their various monitors, media players and controllers, with minimal regard for intervening in the gallery construct. The cables and cords lie as they fell, coiling and twisting on the floor like surfboard leg-ropes, tethering screens to their power outlets in the same way a surfer is connected to her surfboard.

You read this far and you didn’t change channels – thank you, I hope you enjoy the show.
Rebecca Ross, 2016