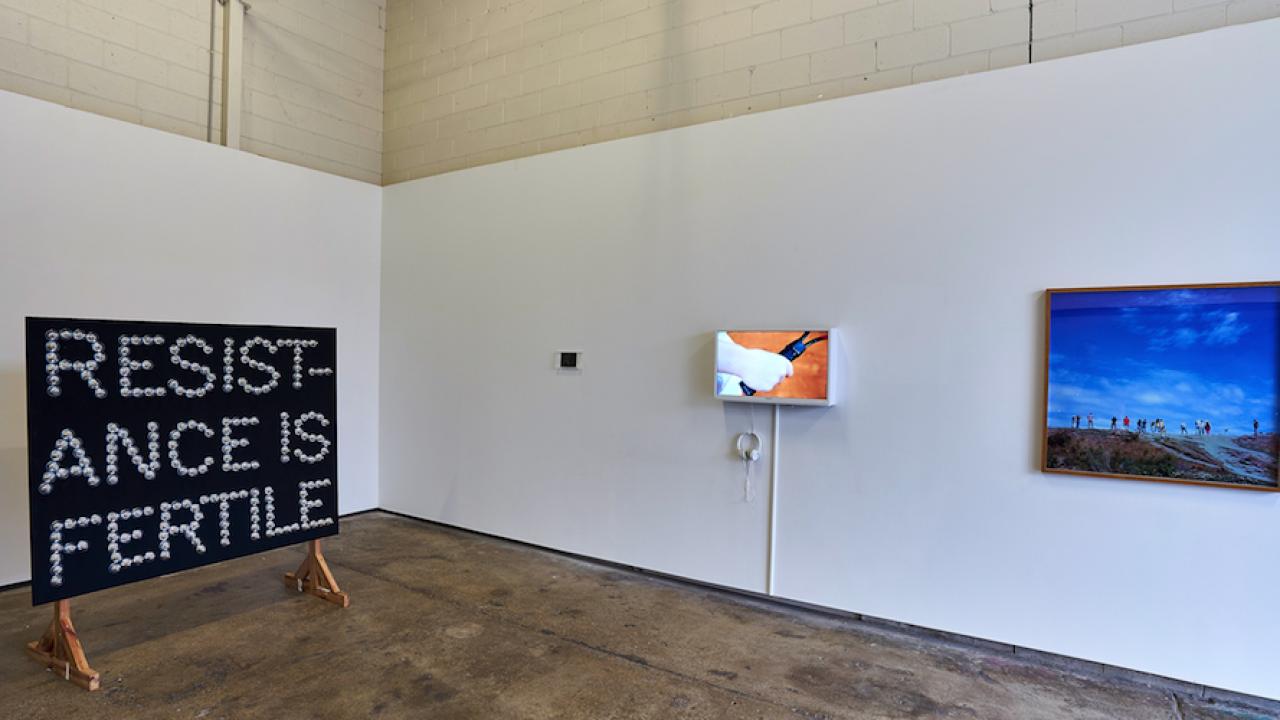 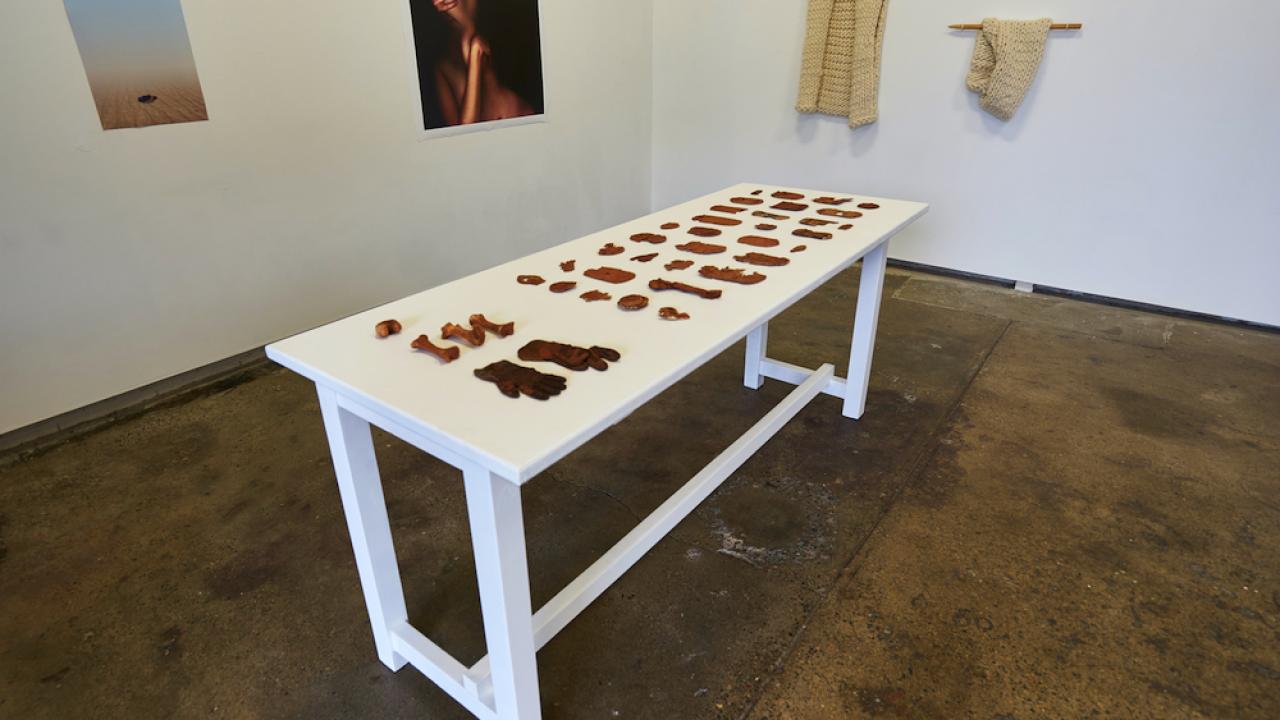 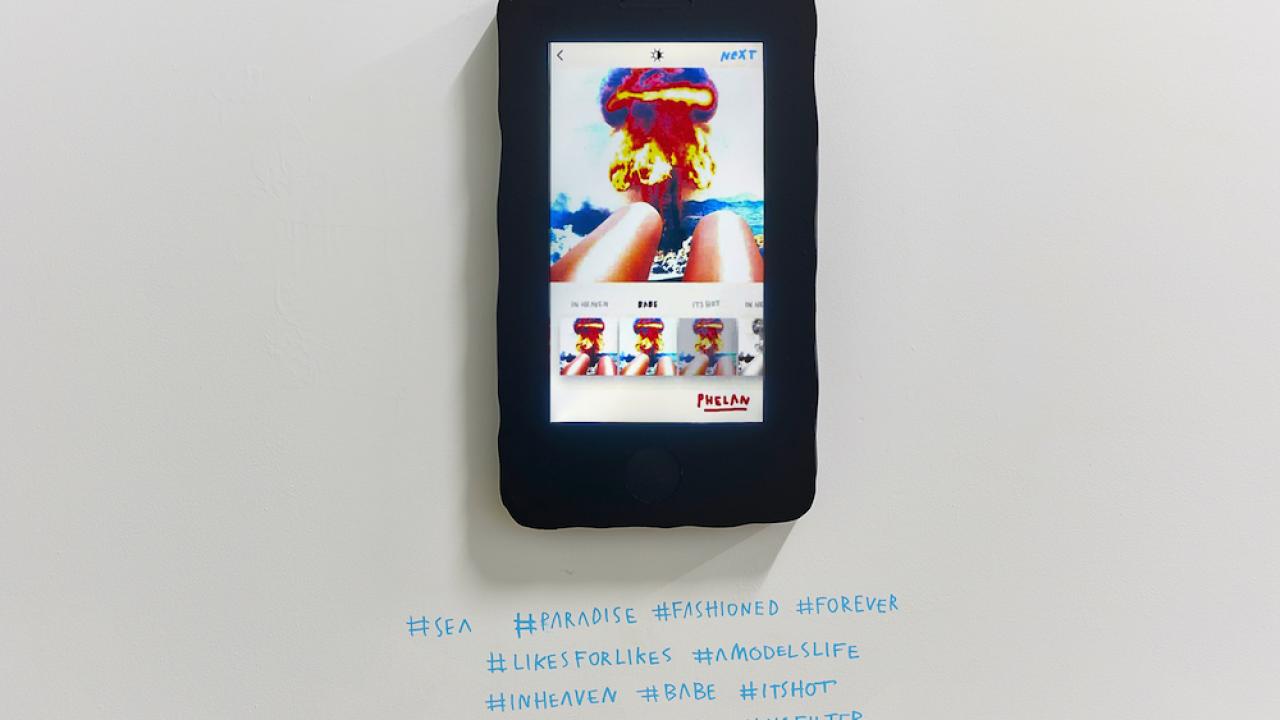 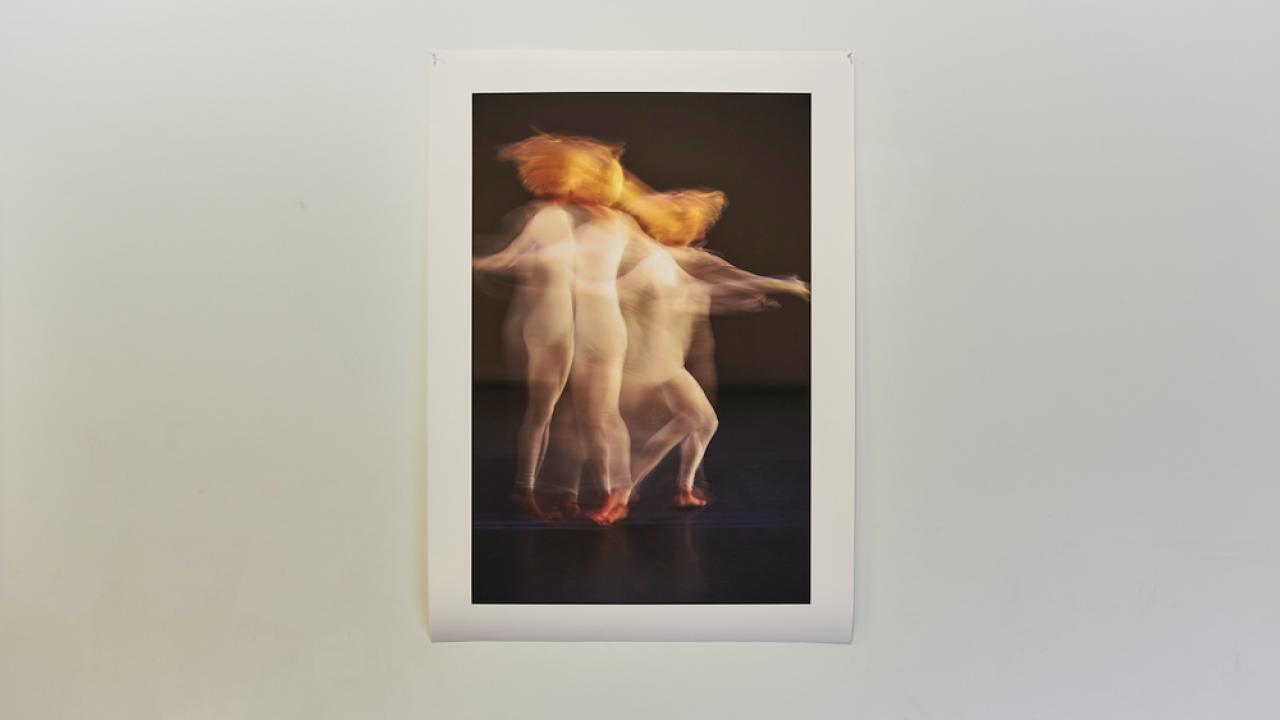 Riding along the undercurrents of Turner Prizes and Archibalds, #PRIZENOPRIZE is an exhibition that will champion and democratise art across all media and levels. Think of it as a soft power alternative to the head-churning, nail-biting process that comes with applying for art awards and being shortlisted for the coveted Bachelor rose of the art world. There is no award moolah for #PRIZENOPRIZE. Instead this is an open platform for contemporary and experimental artists (especially emerging artists) across Australia to exhibit at THE WALLS – which we think is a prize in itself.

‘Dozens of people crowded round to get a look at the squirming calf, straining to touch it and take selfies with it. But, like many species of dolphin, the mammal isn’t able to spend long out of the water without overheating. Tragically the baby dolphin died while still being passed around for selfies…’

Jacob Antony
“Cucumber is a widely cultivated plant in the gourd family, Cucurbitaceae. It is a creeping vine that bears cucumiform fruits that are used as vegetables.” – Wikipedia.

Jacob Antony is a Brisbane based emerging artist, and recent BFA (QUT) graduate; their multi-media practice explores self and Trans themes.

Svenja Kratz is a new media artist with an interest in hybrid and cross-arts practices, particularly the creative and critical potentials of art and science.  She completed a practice-led PhD in contemporary art and biotechnology at QUT in 2014 and has received numerous grants and awards including the 2012 QLD Premier’s New Media Scholarship from QAGOMA.  Her creative works have been exhibited at local, national and international venues including Metro Arts (Brisbane), The QUT Art Museum (Brisbane), Spectrum Project Space (Perth), Science Gallery (Dublin) and the Powerhouse Museum (Sydney).  She currently lives and works in Hobart, Tasmania.

The past four months i have learnt and began a new skill in knitting with giant yarn along with giant knitting needles that look identical to cricket stumps. Inspired by Loopy Mango (New York City) and the knitting culture worldwide, i wanted to make something big. It seemed possible after i was taught the basic knit and purl technique which is what my garment patterns are based upon. My first garment of the collection was the twenty-six stitched ‘box dress’ with tassels on the ends to carry the movement of the whole outfit. The second garment was an oversized vest with a double purl pattern to give the wool a different look. The final garment of the collection had to be something different to the others. From seeing various knitted capelets and neck scarfs online it was decided that the final garment was going to be an over shoulder capelet made from fifteen stitches. As seen below with my team of stylists and photographers completed the modelling of the garments in an ‘earthy’ location making the wool standout within the trees of the forest. I guess this really shows the overall look of how i would want these garments presented and modelled.

Michelle Vine
Michelle Vine is a visual artist and writer from Sydney, based in Brisbane, who is completing her Bachelor of Fine Arts at the Queensland College of Art.

Resistance often carries negative connotations – we may think of our own or others resistance to conform to social norms, to obey the law or to consider another person’s ideas. This work plays on the saying ‘resistance is futile’ which tells us that resisting the way things are is a waste of time. That change and a better life cannot be achieved this way – resistance is not the way to utopia, only conformity is. Instead, this work asks us to consider the inherent potential of resistance as a fertile place for change, where new ideas form and can become influential.

Provoked is an artistic collaboration which comprises husband and wife team Brent and Gabriella Wilson.Having first met in 1997, the artists reconnected at art school ten years later where romance led to collaborating. In addition to Brent’s solo music recording, the artists work in a range of media but use their often humorous and interactive work as a means to make social and political comment. Provoked’s aim is to highlight pertinent social issues that require re-evaluating, bringing the discussion to broader audiences that prompt individuals and collectives to impact real world change. Between them, the artists have won a number of awards and grants, including Highly Commended in the Paramor Prize, Casula Powerhouse (2015); Arts Queensland Career Development Grant (2012); Australia Council New Work Grant (2011) and overall winner of the Wilson HTM National Art Prize, Jan Murphy Gallery (2009). Provoked’s work is held in the collections of Harvard University Library, the State Library of Queensland and the National Library of Australia.

‘Renting Daydreams’ is a digitally constructed image, drawn from the subconscious. Line work hovers in a seemingly endless black hole, depicting a state of grace, raw emotion and unity. The image, which was created in the digital space using cutting edge technology, has been converted to the physical world and displayed in a suspended state to create a sense of intrinsic value.

Claudio Kirac works in a multi-disciplinary nature across painting, photography, design and installation, transcending the boundaries between analogue and digital processes and outcomes. Whilst the constant of change is prevalent throughout his work, Claudio shifts to draw not from nostalgia, but instead to create a modern fabric that reflects the world as he sees it in the present. He has exhibited extensively both nationally and internationally in group and solo exhibitions, with his work in the collection of the Gold Coast City Gallery, the National Library of Australia and private collections throughout the world. Claudio is represented through Anthea Polson Art

‘For Parallel Park, sex is sport, and sport is sexy. They combine slick, advertising-level videography with acute visual and aural metaphors to compare the dynamics of sport and sex by highlighting the degree of eroticism of which we are unaware when points are at stake. ‘ Alexander Kucharski 2016.

Parallel Park is the collaborative art practice between Brisbane-based artists Holly Bates and Tayla Jay Haggarty. The focus of the collaboration is concentrated on playfully exploring the external influences that impact lesbian sexuality and the intricacies of the artist’s romantic relationship. The collaboration heavily employs play as process, which takes form through found objects, performance, video and installation. The engagement with play and spontaneity allows for both practices to weave into the making process, resulting in erotically and humorously charged works that contain a strong sense of duality.

I produce work that engages a contemporary art movement investigating non-human perspectives. This means that current inquiry into the nature of existence seeks to extend dialogue beyond human centered interests so as to become inclusive of the perspectives of other species and the influence of technology on perceptions of lived experience. Media for artworks are videos, installations and manipulations of found materials. The intentions of my practice are multiple, but primarily twofold, the first being an interest in extending existential philosophical discussion through contemporary art, and the second being a grounded interest in justice for all species.

Madeleine Boyd relocated in 2016 from Inner West Sydney to Burleigh Beach, Queensland after 15 years studying, exhibiting and curating within Sydney art and academic networks. She is an Australian artist although her school years were spent in Halifax, Canada. Her first tertiary degrees were in Biology and Environmental Science, later professionalizing an interest in sculpture and performance through arts study at the National Art School and Sydney College of the Arts (SCA). In  2016 Boyd completed her Doctorate of Philosophy at SCA, where in 2005 she also received a Master of Studio Arts. Current associations are the public programs division of the Gold Coast City Gallery, as well as writing and curating with the Australasian Animal Studies Association and the New Materialism in Contemporary Art research cluster at SCA. Boyd co-curated and exhibited work in two significant group exhibitions since 2013 with the support of the Australasian Animal Studies Association and the University of Sydney. She has presented original concepts on art practice-led-research and philosophy at several academic conferences.

The View is a photograph of a ubiquitous scenic lookout. A group of people take in and capture a panoramic view on a tourist trail that could be anywhere.

Bridie Gillman’s practice is focused on the nature and process of negotiating cross-cultural experiences. By drawing on her time spent in Indonesia as a child and her extensive travel as an adult, Gillman’s interdisciplinary practice articulates experiences of existing between places and cultures. Gillman is an emerging artist based in Brisbane who completed her Bachelor of Fine Art with Honours at the Queensland College of Art in 2013. Since graduating she has conducted residencies and exhibited in Indonesia and Malaysia, as well as domestically.

Sonia’s life has been consumed with all forms of dance. She trained extensively in classical ballet and contemporary dance in the UK. Since migrating to Australia she has merged this lived knowledge into silver-smithing, printmaking, sculpture, filmmaking and photography. Inspired to incorporate her embodiment of dance into her arts practice – fascinated by the genre of time exposure photography and how in an instance the viewer is taken on a journey of discovery through dance movement. Sonia is not interested in the pure accuracy of the movement but the actual moment of motion.

Sonia has gained invaluable experience through artist residencies photographing dancers in Beijing, London, Birmingham, Stockholm and Australia. She holds a Bachelor of Visual Arts (SCU) and Bachelor of Digital Media (Hons) QCA GC. Sonia is currently working on her PhD Ageism and the mature dancer.

Mariam Arcilla is a Sydney based writer, marketer, producer, and curator who spent her formative years on the Gold Coast. As a writer, she profiles leading and emerging artists for publications such as VAULT: Australasian Art & Culture, Neue Luxury and Broadsheet. Mariam also collaborates with people and organisations on projects and strategies that contribute towards a thriving and creative Australia. She is a co-founding Director of the Gold Coast initiatives Rabbit & Cocoon (now Miami Marketta), 19 KAREN Contemporary Artspace and Tinygold ARI. As a kid Mariam starred in a McDonald’s TV ad, which saw her devour a hamburger bigger than her face. As a result, she’ll eat all types of hamburgers probably faster than you (she seems to think this is a “talent”).