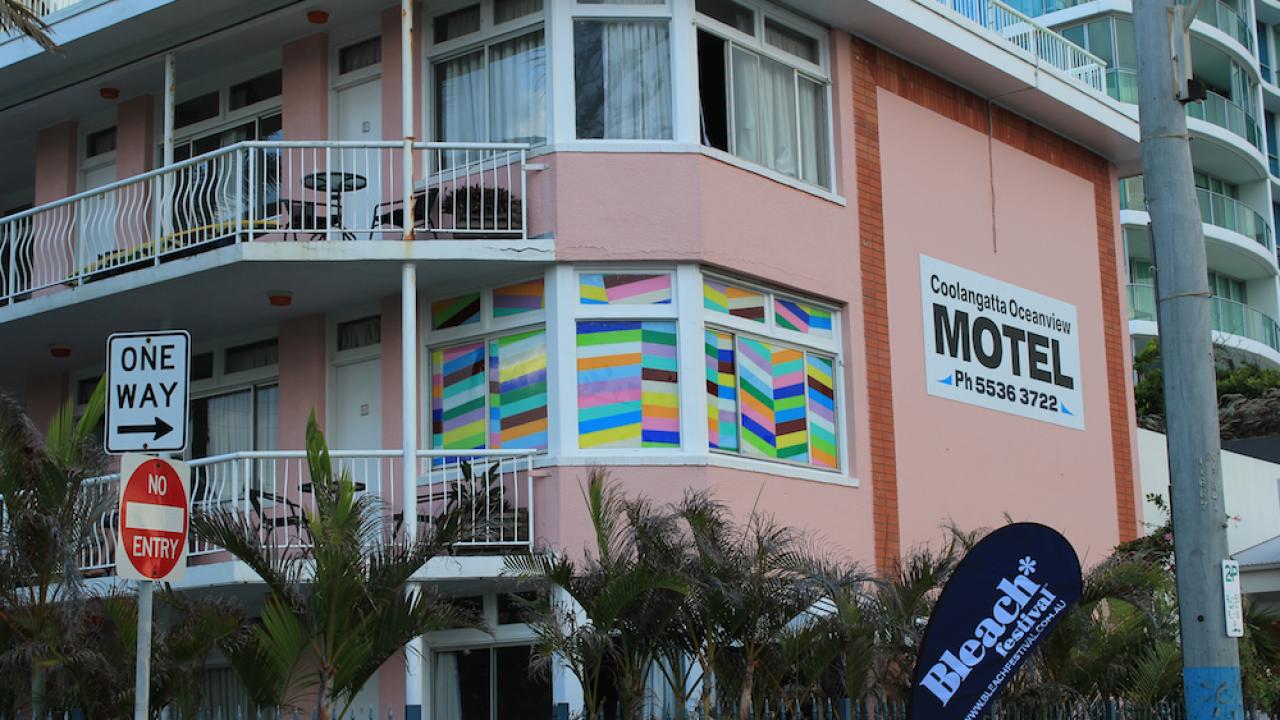 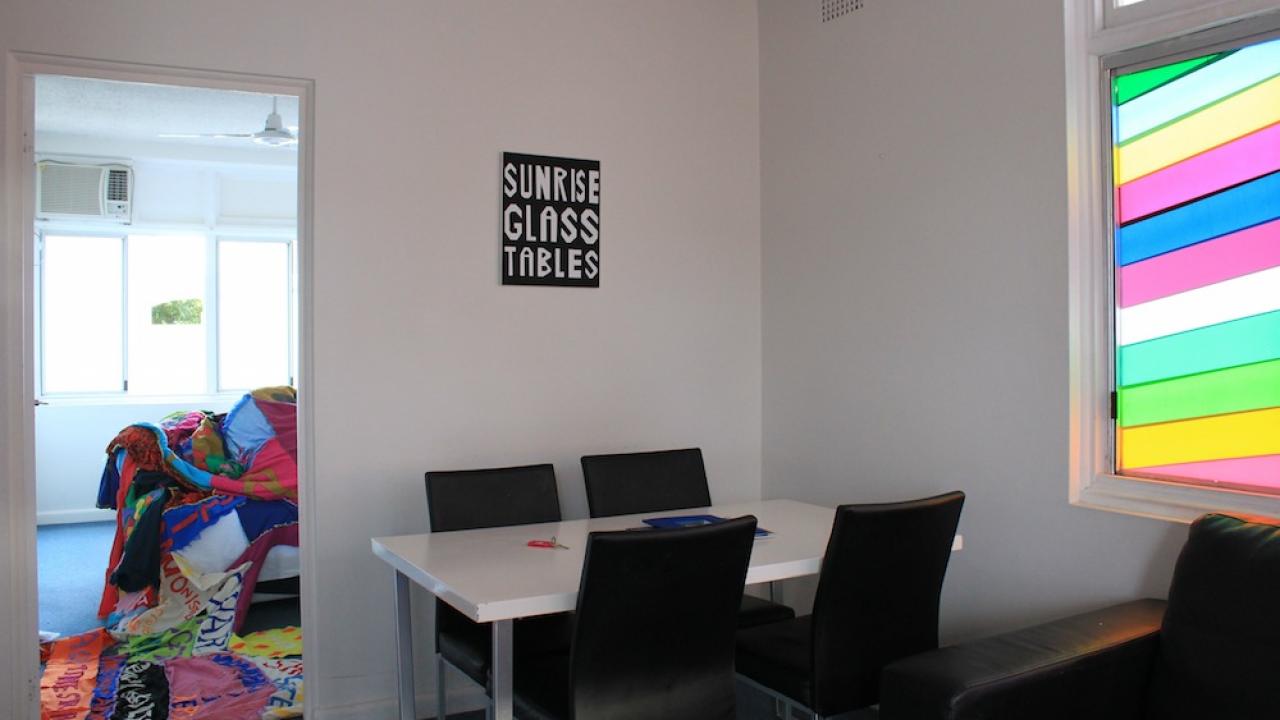 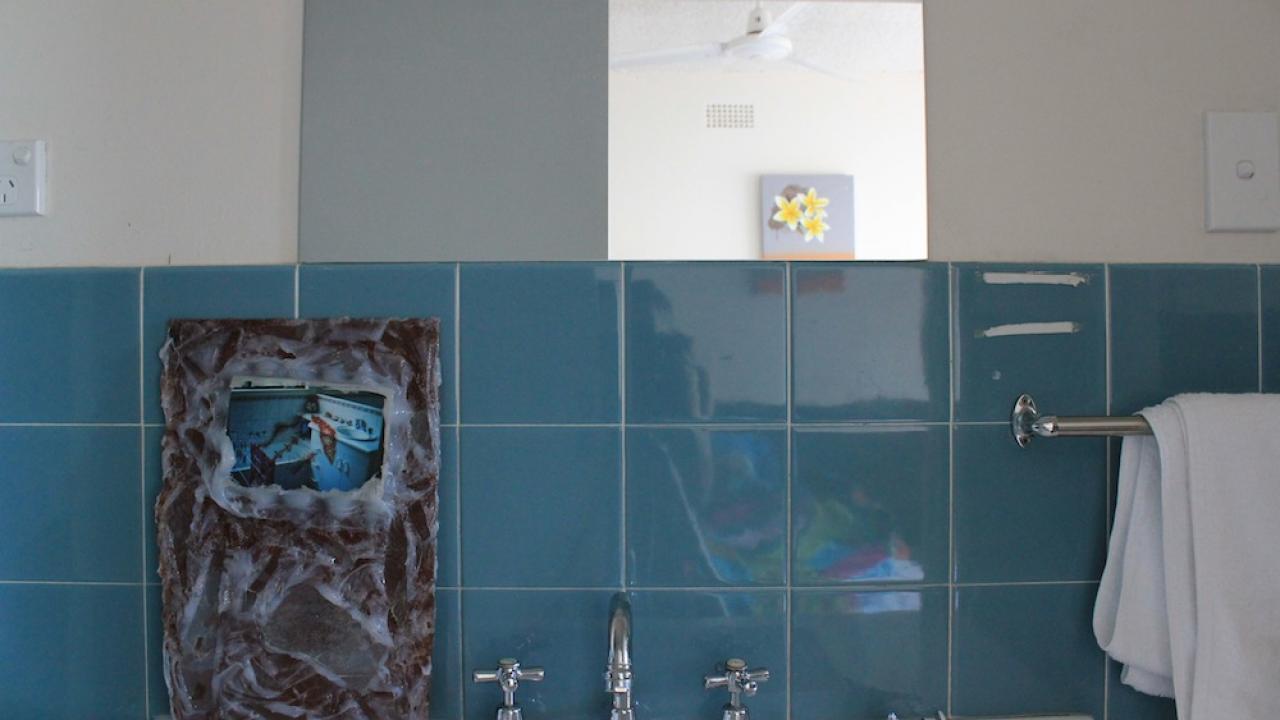 In response to the manager of the Coolangatta Ocean View Motel requesting an extended viewing for Landmark for Vida Lahey (a site-specific artwork commissioned for Fibro Coast EXTENSION at Bleach Festival) I negotiated to have the work remain installed in room 11 until March 22, 2014.  This opportunity for extended viewing presented me with additional time to consider the work, it’s situation, my experience of staying at the motel, and the 24/7 viewing experience that my work provides.  I began to consider the work of other contemporary artists whose work might respond to notions of an ‘all nighter’.

Situated in a high traffic area on the Southern Gold Coast, the Coolangatta Ocean View Motel plays host to transients and holiday makers seeking a lo-fi budget stay in a hub of world class waves during the day and entertainment to fuel their evenings until the sunrises again.  An ‘all nighter’ alludes to an expanded period of time over 24 hours, the window of time in which my work can be viewed.  The context of a Gold Coast motel and my direct experience of staying in this motel over a weekend brought to the surface the reason, aside from situating an artwork, that people chose to stay in such a place.

All Night Long unites works by contemporary artists that can be considered in the context of an all nighter, a party weekend by the beach, a hedonistic daydream, a blurry bender, a night on the Glitter Strip. All Night Long explores the context of the motel room as a platform for presenting contemporary art and representing contemporary experiences.  It presents a final viewing of Landmark for Vida Lahey from outside, with artists Sebastian Moody, Dylan Quirk, Erika Scott, Hannah Smith and David Spooner invited to exhibit inside Room 11 at the Coolangatta Ocean View Motel.

From the corner of Clark Street and Marine Parade Landmark for Vida Lahey can be seen sited in/on the windows of Room 11 at the Coolangatta Ocean View Motel.  The work is a response to the painting by Lahey Coolangatta, Kirra Beach, from Tweed Heads, painted in 1952, and whilst its reference is situated in the distant past, at night the luminous palette acts as a contemporary beacon, a guiding light to home after a night on the town.  Upon entering Room 11, Sebastian Moody’s painting Sunrise Glass Tables presents us with a snippet of a Gold Coast Noir style narrative, the text white on black, is like a surfacing memory of an early dawn.  On the motel TV Hannah Smith’s video Twerk of Artshows the artists body awkwardly move within the screen frame, her dance floor motions akin with those that could be seen at the Coolangatta Hotel on a Friday night such as this one.  David Spooner’s Quartz Quilt sprawled upon the double bed invites us to dive into a psychedelic scape of stitched and tangled soft sculptural elements; a handmade quilt that echos the resort style colourways often seen on the Gold Coast.  Dylan Quirk’s Frangipani hangs above the bed, three flowers the same as those found in the Motel garden bursting out from a predominantly flat grey background, the blooms offering a metaphor for the promise of a new day, the background an overshadow of a hazy night before.  The placement of Erika Scott’s work offers us a double vision, a bathroom within the motels own.  Set upon swathes of silicon and shards of glass, the photograph itself tattooed, Kankkunens is a window into a alternative space that is playfully unsettling.

All Night Long is the first exhibition of The Walls Annex program, where contemporary projects are sited in alternative locations and presented in addition to our monthly exhibitions.